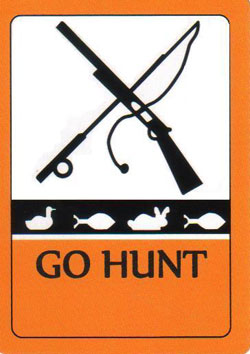 Hello again friends. I have 2 different games to tell you about this month. So instead of beating around the bush, I will jump right into it. So here we go...

The first game I received this month comes from GoHuntCards.com. the game is simple. If you have ever played the card game "Go Fish," then you can play go hunt. Each player is dealt 7 cards, and you play the exact same way that you play Go Fish. You ask another player if they have a specific card from your hand, ie, the "Nice Honkers." The first person to run out of cards wins, and everyone else drinks. You can have people drink based on the number of cards in their hand, or the number of pairs thay have, its all up to you. The part of this game that makes it fun, is the cards. The people at GoHuntCards did a good job at making the cards adult enough, sexually suggestive, and funny. I gave you one example, and I don't want to ruin the rest. Overall, I would give this game a 6.5 out of 10. One reason I had to drop the score on this one was the fact that you're not really drinking the whole time. However, this game can be tweaked and manipulated, pun intended, to fit the personalities of those playing. Visit their site and see for yourself.

The other game I had the pleasure of playing this month comes from Buzz-Shot.com. I've received a lot of card games lately, and I kind of like it. They're nice and easy to store, and the games are simple, which is great for drinking games. For obvious reasons. Buzz Shot is a simple variation of beer pong. With the Buzz Shot cards, each player draws a card before each shot. The card will dictate the way that they must take their shot, in addition to the house rules. The same rules apply in terms of last team with beer left wins, but the cards will take away the advantage that some people get from playing pong too often. Some cards require you take a shot blindfolded, or with your opposite hand. I'll give Buzz Shot an 8 out of 10. It is nice that this game is compact and an easy addition to any normal game of pong. With this deck of cards, you are taking an existing game and improving it, quite a bit I might add. Visit their site for more info. So there you go friends. I hope you all had a wonderful memorial day. Enjoy these games, and I hope to see you again next month. Like always, keep a drink in your hand, and play responsibly.