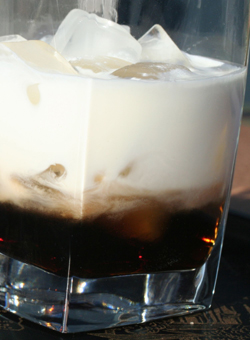 Cinco de Mayo (the Fifth of May) commemorates the Mexican army's defeat of the French in Puebla in 1862, and is celebrated today primarily by Mexican-Americans, prideful of their rich heritage. You can bet that Kahlua will be involved in the festivities, especially when served with desserts such as those Mexican doughnut rods known as churros. Kahlua, as you probably already know, is one of the most popular coffee liqueurs on the market. This Mexican syrupy tipple has been around since the 1930s and is an ingredient in a smattering of world-famous cocktails that rely on its rich coffee-bean essence, and its slightly bittersweetness.

Can you remember the first time Kahlua touched your lips? Perhaps like Paul, you tried it for the first time in college, mixed with some milk plus a few ice cubes bobbing in the mix. Or maybe your initiation into the world of Kahlua occurred earlier in life, as with Steve. His parents always had Kahlua stocked in their home bar? Why? It's an ingredient in Steve's mom's favorite drink, Kahlua and Milk. But did you know that any coffee-flavored cordial mixed with dairy is called a Sombrero? Try it with cream or half and half, and the richness ventures into the realm of liquid dessert.

In an ice-filled rocks glass, pour the liqueur first, then top with the milk. Stir if you like.

Sombrero sounds so much nicer than Kahlua and Milk, though we suppose the Kahlua people would disagree. It's is a decidedly 'light' drink in terms of its alcohol content - it sports half the proof of most spirits, such as vodka. We understand that sometimes you want a little more hooch in your beverage, and that's where the vodka comes into play. By adding vodka to your Sombrero, you've just created a White Russian, a drink immortalized by Jeff Bridges's "The Dude" in the Coen Brothers' comedy flic The Big Lebowski, a wacky mistaken-identity romp whose primary location is a bowling alley. We think it's time you take your White Russian to your local oak-laned alley and get busy.

Shake ingredients and strain into an ice-filled rocks glass.

And for those drink enthusiasts who are lactose intolerant, or don't have a Lactaid pill handy, there's always the Black Russian, whose provenance dates back to 1949 Belgium.

Shake ingredients and strain into an ice-filled rocks glass.

All three of these drinks pair extremely well with a host of confections, such as churros, the grooved (and groovy) Mexican doughnut sticks that are sometimes dusted with sugar and cinnamon, and normally served with coffee for breakfast. We've been playing around with Kahlua, trying to come up with a recipe for liquid churros, and we found inspiration in the most unlikely of places: Ireland. A little Irish Mist, that honey-laced Irish whiskey - based liqueur, mixed with Original Cinn, a cinnamon bun liqueur from Hiram Walker, form the base of this dessert drink

For more recipes, and for cocktail-party food pairings, visit us at CocktailBuzz.com.