It starts with Bobby G pulling in to pick us up at our place on the strip. What starts? Well the great people with Beam and Fortune found out I'm in Vegas and made it quite clear that I needed to spend an evening out with the legendary mixologist, Bobby G Gleason. Not one to complain, I naturally said yes. Besides I could think of worse things to do in Vegas. I will warn you though, I am going to drop names in this story because we were out with some very amazing cocktail giants.

As we're leaving the parking lot, Bobby G explains that we'll head over to a local haunt called Nora's, a place now famous after lots of publicity and a few TV shows. Hey, sounds great and Gaston, a close friend of Bobby's will be there working the bar.

If you are ever in Vegas, try and stop by Nora's. It's a intimate Italian restaurant with great atmosphere, but more on that later. When we arrived, the parking lot is packed. Bobby G though, famous throughout Vegas has no problem getting parking as it appears some of these local establishments have parking reserved just for him. Must be something like the life of a rock star, but that's a whole other story.

We slide up to the bar and very early its easy to tell that Gaston is having a busy night, He makes some comments about making more drinks in less time than they did for the Record Breaking event they did at the bar and nightclub show. Gaston Martinez, Eddie Perales (he's the big cheese over at Rio for their beverage program.) and Anthony "Paison" Alba (VP of the Nevada Chapter of the US Bartenders Guild.) helped Bobby during that event so I'm sure he knows. Too bad the Guinness record people weren't there to confirm it Gaston.

Anyway, Gaston takes some time out to create a truly wonderful cocktail with Prickly Pear. Might have been called a Martini Sombrosa. I'm stunned as he rattles of a long list of ingredients and I fell them take my palette, twist it and have the flavour explode in a subtle way. Tonight isn't about me learning new cocktails and to be honest there is no way I could remember all the drinks Gaston created (not made because mixologists like Bobby G. and Gaston are artists.) 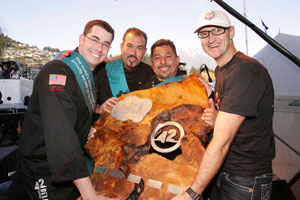 As we're sipping that first drink, Bobby calls me over to meet Eddie who is out on the town and hanging at Nora's. It's like the who's who of the cocktail world. Eddie is pretty fired up and tells us the story of the week long 42 Below Cocktail World Cup down in New Zealand. Eddie, Gaston and Anthony are freshly back after winning the event and they are extremely proud of the fact. A little later, Anthony shows up and the whole team is there, sitting back at Nora's having what I would call the best pizza I have ever tasted. The amazing pizza chef had come out and asked what we wanted. A slight list of ingredients he couldn't use and he was off. As mentioned above, if you are ever in Vegas, try to get into Nora's. It also turns out that the owner of Partida Tequila is in the house with a regional manager promoting Partida. I must admit to being a big Partida fan and Bill secured that by having an impromptu tasting of their extra anejo tequila. I apologize for not remember all of the details, but the Extra Anejo is aged 36-40 months in old Jack Daniels barrels. Man, they didn't make tequila like that when i was young. What a fabulous drink.

Gaston continued to create his amazing drinks well into the evening. Some of the younger staff also got into the swing of things and worked on their own mixology skills, presenting their stuff to Bobby G for some expert analysis. What an absolutely wonderful evening in a great place.

But the night's not over. Bobby hauls us away and we're off to the Rio, the Casino he used to work at. Ever been to Voodoo at the Rio? Do it, best view in Vegas, period. Great club that we hung out at for awhile, drinking some pretty basic drinks. But after having them hand crafted for us back at Nora's, one couldn't expect those continuing for the night. Did I mention Bobby's knack for getting parking earlier? It of course continued at the Rio. Must have been all those years working there. I couldn't find parking like that at Moe's diner when it was closed. Anyone seen the band?

While touring the Rio, Bobby gave us some of the history of the place and it's bars and clubs. the I-bar has arguably the best cocktail waitress uniforms in the world. Not that I noticed or anything. While we were at the Rio, Bobby learned that long time friend Michael Taing was having an anniversary party for his club, the Red Room. Not wanting to miss that, we finished the evening there enjoying some Maker's Mark, party atmosphere and some wild anniversary stuff being put on. The animal costumes were, well Michael I'll not say much more.

What a fantastic evening I spent with a great Mixologist and his friends. I couldn't have asked for any more. For all you bartenders out there, the crew tonight has a motto that couldn't be better said. "Shake it hard, and shake it with a smile." I just wish I had video of Gaston's shake.

As Bobby G was leaving us at the hotel he reached into the back and pulled out a couple of bottles for me to take home. "Plymouth Gin" Bobby says, "is probably the finest white spirit in the world. I love creating amazing drinks with it." I'll not argue with a man like Bobby and his credentials. I'll just take the bottles home and prove him right.