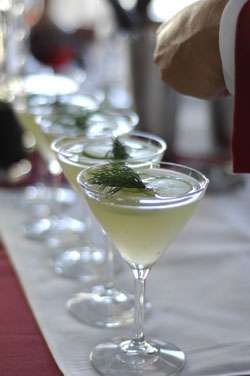 Shake and strain into a cocktail glass. Garnish with a sprig of dill and cucumber slices

"On behalf of Tres Generaciones, we congratulate Armando Rosario on his 'Best Cocktail' and thank all the mixologists for designing creative, great-tasting cocktails," stated Bobby "G" Gleason, master mixologist for Beam Global Spirits & Wine and emcee of the 2009 USBG National Cocktail Competition. "Tres Generaciones is committed to recognizing and celebrating the next generation of mixologists and we wish Armando the best of luck as he takes on the world's best bartenders in the World Cocktail Competition held this August in Germany."

"The 2009 USBG National Cocktail Competition was a great success," said David Nepove, USBG national vice president. "We were able to watch the top bartenders in action as they mixed with Tres Generaciones. We congratulate Armando on his award and look forward to what he will create for the international competition."

Judging for "Best Cocktail" was based on aroma, taste, balance, originality and garnish. Judges also awarded a "Best Technical" prize to Ronaldo Colli for his expertise in managing his bar, bottles, glassware and bar tools. The 2009 USBG National Cocktail Competition took place in San Francisco on May 12.