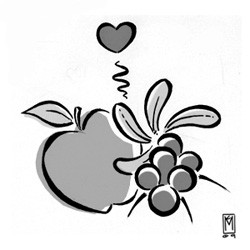 Pour ingredients into a cocktail shaker over cracked ice. Shake and strain into a chilled cocktail glass

~ Adapted from "The Savoy Cocktail Book" by Harry Craddock

Simplicity is crucial...especially this time of year. If you celebrate the yuletide season, you've probably spent the previous 3 to 6 weeks (depending on your level of enthusiasm) decorating, cooking, shopping, traveling and drinking.

It's the drinking we tend to focus on here in this column, and I can guess with a fair degree of certainty that if you're reading this you've been knocking back respectable amounts of eggnog, cider, Champagne and probably a bunch of other holiday hooch for some time now. This is why it's time for some simplicity.

You see, 'round about now, you've been either making or consuming (likely both) drinks that require at least some element of complexity. Not all Wintertime tipples are labor-intensive, but a good many require some aspect of effort that takes them beyond the realm of the average cocktail. Whether it's shopping for an obscure ingredient, dealing with lengthy preparation time or assembling disparate components that require a conjurer's touch to pull off successfully, some of the drinks people crave during the holidays mean work. Aren't the holidays supposed to be the exact opposite of that?

I'm not saying that you abandon effort altogether. As I've mentioned before, nothing worthwhile comes without some effort. Anyone can pop a cork or pass around a tray of shots and call it a party, but if you want to show your guests a good time and mean it, then you need to demonstrate at least a nominal willingness to put some sweat into their drinks (figuratively speaking, obviously).

But effort and simplicity are not mutually exclusive. The Savoy Tango is a perfect example. It's recipe and execution are about as simple as it gets, but the effort lies in rounding up its two ingredients. When made properly, the result is an exercise in elegant simplicity borne of noble effort. Here's why...

Once you've gotten your hands on the sloe gin and applejack, 95% of your work is done. Both can be hard to find on depending on a circumstances- I've often found applejack in good supply in my local liquor stores, but have had to rely on the internet and the kindness of strangers to acquire worthwhile sloe gin (I recommend avoiding the cheaper mass-market brands whenever possible). However, both can be tracked down with a little searching, and are worth having on your shelf as they are key ingredients in a number of other fine cocktails as well.

Once you've got your ingredients, it's simply a matter of dazzling those assembled with your impeccable mixing technique. Wielding a gleaming shaker with confidence shows you're serious about serving up something that your guests will both respect and (hopefully) enjoy. Again, simplicity doesn't mean thoughtlessness- No one wants a barkeep on auto-pilot. Choose large, very cold pieces of ice, and shake with vigor and intent. Also note that this drink tops out at 3 ounces, so use an appropriately-sized glass. It's a terrible thing to present someone with a drink that looks as though it's already half gone (or worse yet, creates the impression you're stingy with the booze).

It also probably goes without saying that a recipe with only 2 ingredients in identical proportions can be memorized in the time it takes to read it. That's about as simple as it gets. Even if you're drinking right along with your guests, you should able to keep this one in your noggin for the duration of the festivities.

So raise a glass to simplicity. May it help keep you happy and healthy in 2010 and beyond!