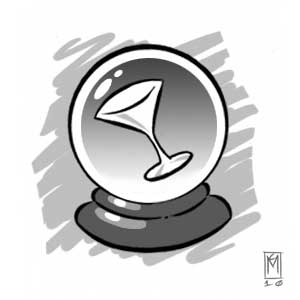 Shake everything with ice and strain into a cocktail glass. Garnish with a thin strip of orange peel.

Every so often I peer into my cocktail glass crystal ball and beseech the mystic powers of the cosmos to grant me a glimpse into the future. Channeling the nebulous energies of the great beyond, I attempt to divine What Will Come To Pass. Strangely, the information I receive is always alcohol-related, but who am I to question the motives of those who dwell in dimensions untraveled by man?

Here then, are my predictions for the coming months...