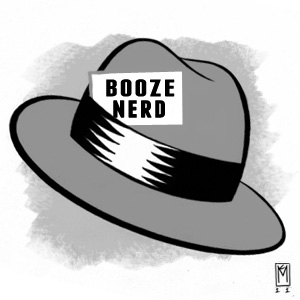 Shake in an iced cocktail shaker and strain into a tall glass filled with crushed ice. Garnish with assorted berries and add a straw.

I'm not someone who likes to oversimplify things, but I need to point out there are really only two types of alcohol consumers: cocktail geeks and casual drinkers. How can you tell the difference? Easy. If you spend your free time reading reprints of 19th-century bar guides, making your own bitters and buying antique Hawthorne strainers on eBay, then you are a cocktail geek. Otherwise, you're a casual drinker.

Casual drinkers are a fine breed, as they, unlike cocktail geeks, are unencumbered by the compulsion to make perfectly spherical ice or engage in lengthy, passionate debate over who really invented the Mai Tai. They are free to simply enjoy their drink...without casting a critical eye upon either its ingredients or preparation. It's a mercifully blissful state not being a cocktail geek. I sometimes look back wistfully on the days before I knew what pimento dram was, when I could, for example, order a Jack & Coke without feeling as though I'd somehow committed a betrayal against myself or my fellow drink enthusiasts.

(For the record, I still love Jack & Cokes as well as whole host of other drinks that are deemed substandard by the cocktail cognoscenti. As a matter of fact, I've gained a reputation among my colleagues for being somewhat of an aficionado of poor-caliber spirits. Whether this is deserved or not remains to be conclusively determined, but I fear based on past statements and actions, the label will stick.)

Back to the so-called "casual drinker." The casual drinker accounts for 98.3% of people you're likely to encounter drinking an alcoholic beverage* (I'm leaving out wine snobs and beer buffs for now...they've got another whole thing going on, and we'll deal with them another time.). Yes, almost everyone you run into who's tipping a glass somewhere hasn't the faintest idea who Jerry Thomas was or cares one way or another whether a Manhattan should be stirred or shaken (or even knows what's in a Manhattan for that matter).

My point is: that's not a bad thing. Imagine a world where the majority of people who drank were booze nerds. First: most bars would disappear. If almost every bar patron demanded top-shelf liquor and impeccable cocktail assembly, nearly all the world's watering holes would close up shop as a result of being unable or unwilling to provide the requisite obscure, high-end hooch (Also, there would be no way to supply enough retro-style brimmed hats for everybody). And what about staff? Good luck finding enough bartenders who would put up with the legions of picky, demanding drink geeks who would comprise their customer base night after night.

And now I can hear someone saying, "But Doc, if this hypothetical situation was real, wouldn't it actually result in a better drinking culture, since demand for quality products and service would force everyone to cater to the demands of a discerning public?

The answer is no, and it's for one simple reason: Nobody can push a button and make an unlimited supply of 20-year-old Bourbon appear just because everybody suddenly wants it (Although how cool would that be?)

That's just one example. And I also realize that in the above scenario I've portrayed drink geeks as inflexible nuisances who insist on drinking nothing but the highest-quality liquor and only flawlessly-executed cocktails, regardless of where they find themselves. That's obviously not fair, and it's obviously inaccurate I know plenty of hardcore cocktail enthusiasts that often drink "regular" (and occasionally downright lousy) booze for a variety of reasons. But here's where I'm going with this...

If you're a drink geek, be thankful that most of the drinking world doesn't share your tastes and preferences. If the guy or gal on the next barstool wasn't drinking a Seven & Seven or a Cosmo, then he or she could potentially be sucking down an amazing craft-distilled rye or a small-batch gin, depleting the limited supply even faster. Rather than cursing their lack of sophistication, you should be celebrating the kindness they've done you by allowing more of your favorite spirits to remain in circulation. (I believe economists call this the "More For Me" phenomenon.)

So the next time you hear someone order a Long Island Iced Tea, instead of rolling your eyes or struggling to stifle a sneer, raise your glass and toast 'em. They're drinking badly so that you can drink well. And there are few sacrifices more noble.

* This percentage may be an approximation.