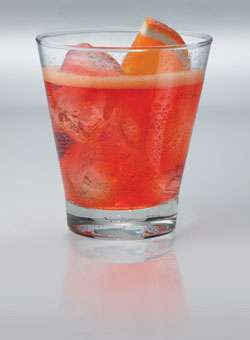 The perfect Spritz is prepared in a wine glass, or rock. Add ice, Prosecco, dash of seltz and top with Aperol. This is to avoid that the Aperol settles on the bottom. Garnish with a slice of orange.

The origins of this drink are not known but it is widely believed that the Spritz was born during the 19th century Austrian occupation of Italy. Its name, in fact, may derive from the German verb spritzen meaning “to spray” or might be linked to the name of specific Austrian wines of the western region of Wachau. German soldiers soon got used to drinking local Venetian wines at the many taverns, but the alcohol content, so much higher than the beer they would drink back home, made them dilute it with water. Thus was born the “straight” Spritz that is still found in some bars of Trieste and Udine.

With time the Aperitivo ritual of northern Italy spread to the rest of the country, and with it the variants of the original Spritz. Many Venetian towns had their own specific variant, and many interpretations of each kind. However, in the last decade the Aperol Spritz with Prosecco has become the most popular one; fresh, sparkling and light- the ideal early evening drink.

But the Spritz isn’t only an Italian phenomenon. Recently, both the Spritz and Aperol are starting to take hold in many different countries, including the US. For example, in the smash hit “Meet the Parents” starring Robert de Niro, Barbra Streisand, and Dustin Hoffman, the latter offers De Niro an Italian Spritz instead of his usual Tom Collins.